The Power of Positive Thinking and Dementia

In honor of Alzheimer’s and Brain Awareness Month, I wanted to share some thoughts regarding the latest research on the subject of dementia. The results of a recent study pose some interesting challenges for all of us living in the post-COVID world.

At a time when it seems difficult, if not sometimes impossible, to maintain a positive outlook on life, this new study tells us that to decrease our risk of developing dementia later in life that is precisely what we need to do. This study, published earlier this month in the Alzheimer’s Association journal Alzheimer’s and Dementia, found that chronic negative thinking over time can lead to greater cognitive decline as we age including having a significant impact on deposits of both tau and beta amyloid in the brain which are the tangles (tau) and plaques (beta amyloid) long evidenced in individuals with Alzheimer’s and other forms of dementia. The authors go so far as to suggest that with further research and testing this repetitive negative thinking (RNT) might warrant consideration as a new risk factor for dementia.

The researchers reinforce the value for all of us in paying attention not only to our physical health but our mental health as well. While the additional stresses and strains presented by COVID make it much harder on everyone to follow this power of optimism advice, the research pinpoints the long-term value that behaviors such as positive thinking and mindfulness practices (e.g. meditation) can have for individuals. In addition, prior research has shown that the more positive a person is the greater the protection from other health issues such as heart attacks and strokes, as well as other causes of death.

Fortunately, for those who may consider themselves more pessimistic by nature, previous research has also shown it is possible to “train the brain” to become more optimistic, similar to training a muscle through physical exercise. One study found it took only about 30 minutes a day of meditation practice, for example, over a relatively short two-week period, to produce a measurable change in the brain.

A couple other ways to work toward a more optimistic outlook include practicing gratefulness by, for example, taking a few minutes each day to write down what you are thankful for in life and/or making a list of the positive experiences you have had on that particular day. Finally, reframing is a technique whereby you take your negative feelings/reactions to a situation and readjust that thinking to create more positive alternate feelings/reactions.

While practices like these may take extra effort to initiate in your life, once you have made them a more regular and consistent occurrence, 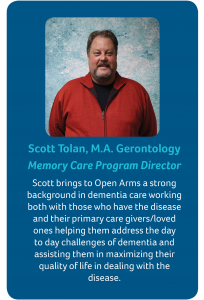 you should experience the benefits and, most importantly, help to reduce yet another possible source of cognitive decline. Good luck in your quest.

Sarah's journey in senior care started with her grandparents and finding the right care for her own family.

Does your loved one need in-home care?

Take our five minute online assessment to help you determine if your loved one needs in-home care.

We'll help you put together a care plan and discuss everything you want to know about working with our caregiving team.